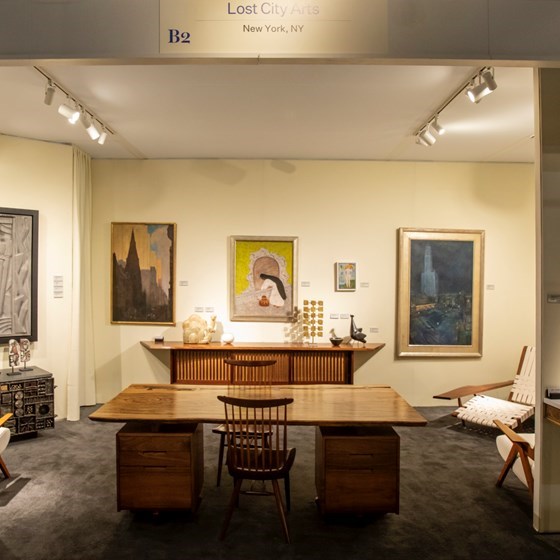 Established in 1982, Lost City Arts has distinguished itself as a world-renowned source for mid-century art and design. James Elkind, owner, and founder of Lost City Arts has continuously brought to market the beautiful, the curious, the heroic and the inspired. Lost City Arts began as an outpost for architectural artifacts; pieces of buildings otherwise slated to be lost to the wrecking ball.
“The scale and patina, the inspired and exacting craft of immigrant European stone carvers and metal workers, ensured that NYC would take its place as the leading metropolis of architecture in the United States,” says James Elkind.

A new era had begun, as demolition in the city waned, and our customers, the baby boomers, were starting their own families and buying more practical things like furniture and lighting. Lost City Arts moved into the familiar area of modern design and fine art from the period after the WWII. “Having grown up in a modernist home, with all the important trappings, including furniture from Knoll, Herman Miller, and Jens Rissom, I immersed myself in the world of mid-Century Modern.” Traveling the world looking for singular works of art and design was a non-stop treasure hunt for James Elkind. By then his Soho gallery had become a go-to destination for the creatively inclined, represented by architects and interior designers as well as film stars, artists, writers, producers, and directors. His pieces showed up in Woody Allen movies, MTV videos, covers of Vogue, and were bought as gifts for special occasions.